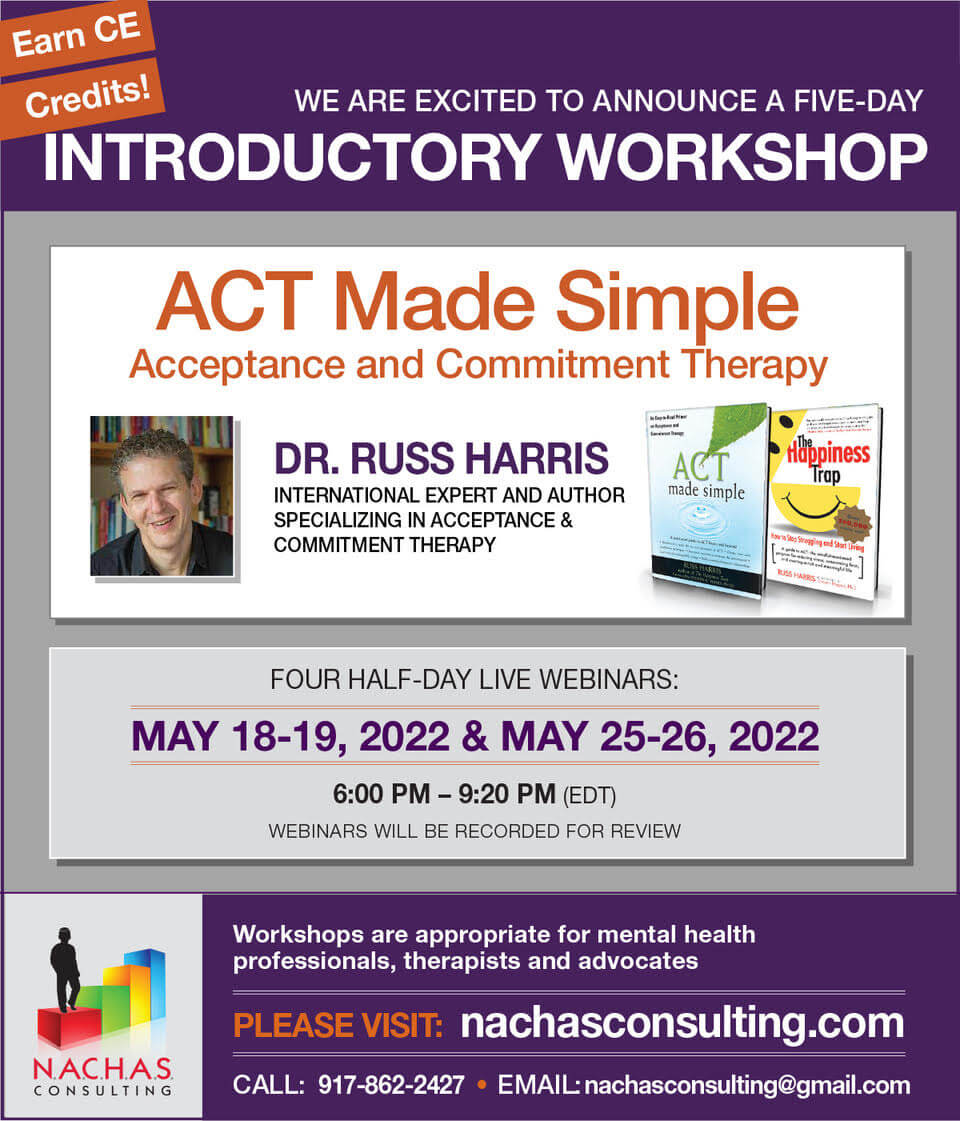 There is no known commercial support nor conflict of interest for this program.

The ACT Made Simple workshop is very experiential, and useful for both therapists and coaches. Russ likes to call it ‘ACT Made Simple‘ – because it covers so much material in such a short space of time.
Each workshop is a ‘jargon-free zone’ guided by three core values: simplicity, clarity, and accessibility. (There’s also a big emphasis on having fun).
You will experience a wide variety of ACT exercises, and you will be encouraged to work with your own personal issues. You will be lead through these exercises in the same way as you would instruct them to your clients.
You will also receive extensive support materials (more so than in any other ACT training around the world) including a free copy of Russ’s ACT-based self-help book The Happiness Trap (this will be an eBook), an album of professionally-recorded mp3s of key mindfulness skills, and a 3-month-long follow up e-course.
Each session of training will last for three hours and twenty minutes. This consists of three hours’ training plus two 10-minute breaks.

Dr Russell Harris, M.B.B.S., is a medical practitioner, psychotherapist and executive coach, in private practice in Melbourne, Australia.
He graduated in medicine from the University of Newcastle-Upon-Tyne, England, in 1989, and emigrated to Melbourne in 1991.
As a GP he became increasingly interested in the psychological aspects of health and wellbeing, and increasingly disenchanted with writing prescriptions. Ultimately this interest led to a total career change. He now works in two different, yet complementary roles – as a therapist and as a coach.
Since 2005, Russ has run over 800 two-day workshops and provided ACT training for over 60,000 health professionals. He has authored four ACT textbooks (ACT Made Simple, Trauma Focused ACT, Getting Unstuck in ACT, ACT Questions & Answers), and four ACT-based self-help books (The Happiness Trap, The Reality Slap, The Confidence Gap and ACT with Love). His best-known book, The Happiness Trap, has sold over one million copies worldwide, with translations into more than 30 languages.
Russ has a unique model for training, which he calls ‘ACT Made Simple’, because it covers so much material in a short space of time. (In fact, he even has even written an introductory text book on ACT, titled ‘ACT Made Simple’. To download the first chapter, click here.) He proudly proclaims each workshop a ‘jargon-free zone’ – and bases his training on three core values: simplicity, clarity, and having fun. His highly-acclaimed ACT workshops are brief, powerful, cost-effective and life-enhancing. Participants regularly report not only major improvements in their therapy and/or coaching, but also in their personal lives – and evaluation forms frequently praise his ability to make complex ideas seem very simple.

At the conclusion of this program, you will have learned:

Topic 1: Opening ACT – What’s It All About? Topic 2: Drop The Struggle Topic 3: Watch Your Thinking – The Art & Science of Cognitive Defusion Topic 4: Do What Matters – Values and Committed Action Topic 5: Open Up – Acceptance and Self-Compassion Topic 6: Fluent and Flexible – The Dance of ACT